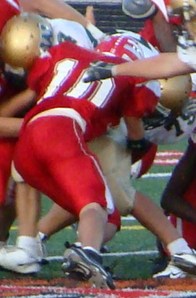 We are used to hearing that from little ones about their older brother or sister getting to do something that they are not or not being allowed to stay up a moment past their bedtimes. Even from our teens in not being allowed to go have the freedoms of an adult without the mentality of one. But as adults, we sometimes find ourselves saying that as well. And you know what; it is okay. It is justified when we are upset about a slighting of our children or loved ones. I find that I say it more in my “momma bear” mode for my kids than I do for myself. After all, I am a grown up, I know the motto suck it up, but when it involves ones we love, well then, the rules change.

Get ready folks, football season has started and there will be a lot of analogies coming your way. This is my son’s Senior Year in High School. Big time! The season has not started and already I am biting my tongue enough where I think it will come off at any moment. First let me explain, my son is a chip off both blocks. Between his father and I – the kid is kind of ruined in terms of stubbornness, attitude and strong desire to express our opinions (in an appropriate way) when we see things that are not just. And, well, there is the attitude. He is 17, and a boy, and plays lots of sports, and has inherited his mother’s attitude. People have told me they can just look at me and know immediately if it is really a wise idea to challenge me on something at that moment. I tend to wear my heart on my sleeves. My son has also inherited my naive firm belief that things should be just, right and fair. Decisions made on the basis of merit, ethics and all the proper values. What I have seen in less than a week is testing what we are made of; but, as his father pointed out, it is just a matter of proving yourself once again and it will happen. But as a mother, it is hard. It is hard to sit back and watch helplessly while these things transpire. I want to DO something, I want to be able to make something happen, I want to make it better.

Last week I talked to a woman who is helping her husband with his resume. He is in an incredible funk and this sweet woman is carrying that burden along with the stress of trying to continually build him up and look at the bright side of things. It is killing her watching the effect the transition is having on her husband. She wants to do something, she wants to make things happen, she wants to make it better.

Another client freely admits that he is driving his wife insane because he is looking for work and is being a complete (and not my words) “nutcase” about it. He said his wife has asked how she can help (my assumption: she wants to do something, she wants to make things happen, she wants to make it better) and he tells her he does not know what she can do.

You see, the stress of transition falls not only to those that are in transition, but to everyone around them. Men, and yes I am generalizing here so forgive me, tend to merge who they are with what they do and how they can provide. When there is a chink in their armor, it drives straight to the heart. Women, again I am generalizing, want to do something for them, to make it better. It is a tough world to live in and sometimes we just do not see beyond our own frustrations.

Great, you may be thinking, you have wonderful insight to what is going on in my home but how do we make it GO AWAY??? I wish I had the magic answer to that. It simply does not go away, it eats and tears at us. Personally, I try to take a philosophical approach. This is a time that nerves are raw and we really see the ties that bind. This is the opportunity for very open communication and a chance to become stronger, even if it is not at this moment, but in time. It is also a time to make plans (a primary and back up or two), have a purpose, and go after that primary plan. And if it just so happens that it is not working out the way you want, after you have put everything you have into it, then you already have your back up ready to implement. Take control of what you can and do the best with what you have, this is no time for excuses. Now is the time to give it everything you have no matter what.

For the woman and her husband, I told her to blame me for the following: she was to go home and tell him that I would be glad to speak to him at one of my classes; however, before doing so he must come up with 25 positive things about himself. Only after I see this list would I be able to help him with his resume. I told her the point in this is to force him to see the good in himself in what he can offer not only in a job, but in other ways. It is a difficult assignment; however one which I think will be very valuable. I image that he will want to ask her for advice on the list and possibly he will get some glimpse of insight as to how much good she sees in him.

For my client, I told him he must tell his wife that he knows he is being a donkey’s rear end and he appreciates the fact that she has not smothered him in his sleep. He is not intentionally shutting her out but he honestly does not know what she can do to help him. And I told him he should tell her that as well then ask her opinion. Once he has asked for her opinion, he must shut up and listen. Not knock any suggestion that she gives but be appreciative that she gives it. And he should allow her the opportunity to tell him he’s been the rear end and offer a diversion, do something outside of transition world, even if it is a walk around the block.

For me, well, I am going to focus on the positive that my son has incredible athletic ability (this is not momma bear bragging, I have had several coaches tell me he is one of the most athletic kids in the high school) and is a strong young man able to stand up for himself and what he believes is just and right in a moral sense and not in a self-centered-the-world-revolves-around-me-teenage-entitlement sense. Yes, he knows the difference, I have seen it in action and it is those moments that my breath catches in my throat because there is an adult in there wanting to come out! Although, sometimes he just chooses to ignore it. I have to believe that when all is said and done he will be on that field kicking butt and (from my keyboard to the greater power’s ears) some college will want him to come play for them. Just on a side note, I also have game film of him, just in case any school is interested in seeing just how this kid tackles so hard he gives concussions and has hands that the ball just seems to find…

Just email: Admin@CareerPolish.com to get started!