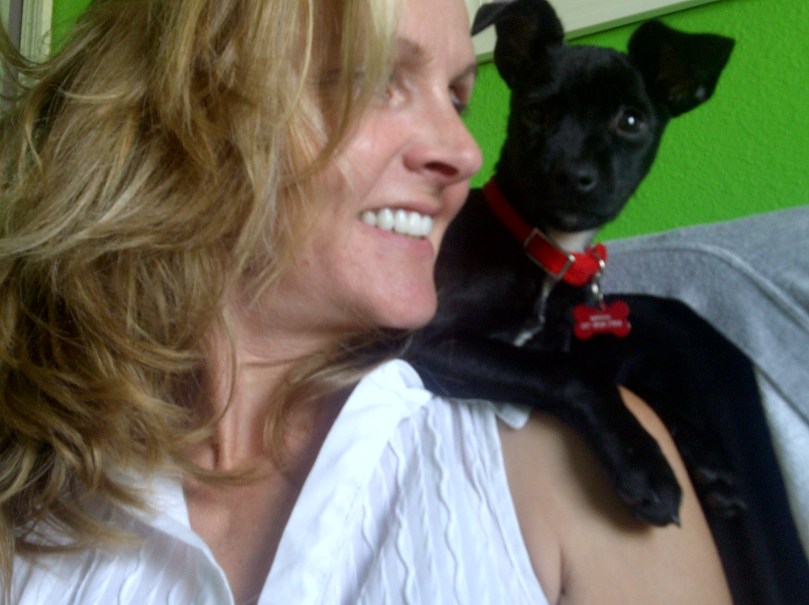 Sorry for no blog yesterday – I sent out my newsletter, which you can check out here: September Newsletter. Today I’m back on track and it is a good day – the puppy’s poop is normal – yeah! Yes, this is a big deal in my house because a few days ago he was pooping out dead worms. Gross I know – welcome to my world.

Recently I adopted two dogs, only meant to adopt one, but someone brought in the puppy and I figured at this point four or five dogs, does it really matter? And he was small, not like it was a real dog anyway. I’m a fan of big dogs, BIG dogs, my favorite was Norman a Great Pyrenees that was one of a kind. So Brutus is not a real dog because his so little, as you can see from the picture – that’s why I had to give him a big name.

Anyway, Brutus was found under a car with only a flea collar on, and now I know why. Turns out Brutus had worms. He was perfectly healthy and happy except the bloated tummy. I took him to the vet the other day and he got a wormer medicine and within a day those nasty things were being expelled from him body and he was a happy camper.

When I told my ex-husband about the culprit and cure he said he couldn’t believe someone could dump a puppy because of that and asked how much I paid for the treatment: a whopping $15. Brutus was dumped when $15 fixed him – well, fixed the worms. There are size issues and an identity crises going on, but other than that he’s cool. I think $15 was a small price to pay to save the little guy and bring him into the pack. He and Luke are fast friends and he is an unending source of entertainment.

Sometimes we can offer a small gesture to others at a very small cost to us but it means so much to them. A compliment, a lending hand, a couple dollars when they are short at lunch, even a smile can all seem meaningless to you but they could make someone’s day. There is a quote that says something about you get the most when you expect the least in return.

In this very fast-paced, hurry up and get there world we often forget to slow down and notice anyone else but ourselves. Take a few minutes today to dial it down a notch and give a compliment to the cashier at lunch, say hello to the person passing you in the hall just give a small gesture today and see if it doesn’t make the load a little easier. Who knows, maybe that cashier was having a terrible day and that compliment made all the difference. Wouldn’t it be nice to think that you made someone’s whole day today and for such a small price of just a moment of your time. Pretty amazing thought.

Now that Brutus is feeling better, I need to go coax him off Luke’s back, he seems to think he is a giant chew toy and right now it is nap time for the pack which means quiet writing time for me!