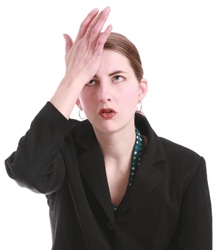 I am not a traditional coach – I routinely begin coaching my clients by telling them that they are going to make a mistake during some phase of their job search, interview or job performance.  Not that they might, but, yes, they will.

I want them to realize this so it removes the fear of mistakes.  I completely agree with Elbert Hubbard when he said, “The greatest mistake you can make in life is to be continually fearing you will make one.”

A mistake is the tiny step that trips the wheel to an entirely larger and important process.  The end result of this process is entirely up to you and depends on the steps you take after the mistake.

So get over the mistake, or be thankful for it, because it is the catalyst.  The real test begins after the mistake.  How you are received is going to be dependent on your actions, not so much the mistake.

I have messed up plenty of times in my life – personally and professionally.  I sometimes wonder if I serve as an example to others on what not to do as much as giving advice on what to do – but that is another story….

There are times that I can look at my mistakes and really see a good lesson, then there are some that I just have to shake my head and think, “My goodness, I really am an idiot”, but let’s focus on the positive – and something more relevant to people in transition or progression.

Let’s look at an example of interviewing.  Again, before you even go into the interview remember, you are going to make a mistake.  Knowing this will help alleviate the fear and help you recognize when you do in order that you can more quickly take action.

So the interview is going along nicely and all of a sudden you realize that you are talking and have somehow gotten off point.  Could it be the confused or bored look on the interviewer’s face that gave it away?  Or maybe your little inside voice that has now lost track of what you are saying and says, “I no longer know where you are going with this.”  Uh oh.  Now what?

Taking control is the pivotal point in this process.  Admitting that you are lost in your own conversation could be seen as admirable, yet it is not enough to take control of the situation.  You have to take ownership of what you have done and personally move it forward.

After your breath, smile and say one of two things:

“I’m sorry, am I addressing the question the way you intended or was there another avenue that you had in mind?”  They could have asked the question with a certain thought in mind and you interpreted it in a completely different way.  Once you receive the clarification go back on point.

“I’m sorry, I have seemed to wander off topic, I am not sure how I got here but let me get back to point…” and continue back on point quickly, in a concise manner then shut up.

In both cases you acknowledged it but then you took ownership in redirecting it.  Adding the smile and a bit of humor in the second scenario also helps put the interviewer at ease and they will be more likely to forget that you had a brain lapse.

There are times that you will make a mistake at your current job.  That is always fun, and it will happen at some point.  I still remember my biggest mistake ever to this day and it was well over a decade ago.

It was for a new client of the Managing Director and could have cost a lot of money as well as his reputation.  Once I screwed up I had a freak out moment or two.  Oh, and to add to the mix, his assistant was out of town and I was still new at my job.  Ok, I had several freak out moments.

Then I tucked my little tail between my legs and went to the other assistants and said I needed help.  I told them what I did and that I was freaking out and asked how do I fix this because I couldn’t think clearly without seeing pink slips before my eyes.

They banned together, calmed me down, told me who to call, I made the call, set the process in motion and kept on top of it until every single residual effect had been clarified.

During this time my boss came back from lunch.  Uh oh.  Still being new I will admit that he still scared me, a lot.  So I gathered what little courage I had at that time and told him quite frankly, “I didn’t just screw up, I f#@$ed up”  It was that big of a mistake and if I was going to get fired I felt the f-bomb was appropriate at that time, and adequately described the situation.

But the next thing out of my mouth was, “but this is what I have done so far to correct it” and I continued to detail what steps I took immediately after the mistake, who was involved, how I was checking on everything and when it was expected to be corrected.

Then I held my breath.  He just looked at me and said, “ok” then left for the day.  Holy crap.

Not only did I not get fired, but I stayed there for a long time and we ended up developing a great working relationship based on trust, respect and being very upfront.  Had I only gone into his office with an “I’m sorry, I messed up” then the end of that story would have been completely different.

I took ownership and even though I had to start every conversation to every single person that helped me out along the way with, “I screwed up and I need your help to know how to fix it” I survived.

I also developed great working relationships with all the people that helped because they knew that if I messed up I would not only apologize but immediately ask what I could do to fix it.  I didn’t look to pass it off on anyone else to clean up my mess and I took my lumps like a grown up.

Today you might make a mistake, a small one or a really big one; just remember, what is done is done the important part is what are you going to do next?

There is no expiration on taking ownership.  Maybe it has been a while since you screwed up, well today is as good as day as any to man up.  Mistakes can be corrected or forgiven, but only with acknowledgment and then ownership.  It may not be fun, but it is well worth it.

One thought on “Want To Prove Something: Don’t Just Acknowledge Your Mistakes – Own Them!”