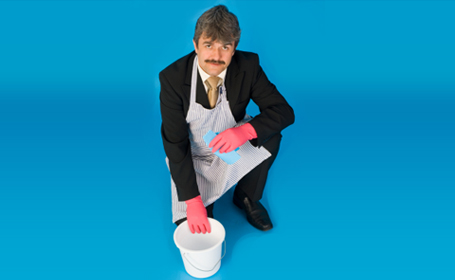 I think there is a genetic link to testosterone and adversity to laundry or cleaning.  Of course, not in all men, just the men I happen to know.

When I was married my ex-husband used to get out of doing things around the house because “he wasn’t very good at them.”  Give me a break here – I was in my early 20s so I did not know any better, I didn’t catch on to this game.

I grew up in a house where my dad did plenty of the housework.  Actually, he wouldn’t let me mom vacuum because he didn’t like the way she did it and thought he did a better job.  I think he had a thing about cleaning the windows, too.  So this little game was new to me.

This trait was passed on to my son, but by this time I knew better. He just couldn’t clean his bathroom because he didn’t know how to do it as well as I did or just couldn’t.  That didn’t last.  Poor kid.  I made him a detailed, step by step instruction sheet on how to clean not only his bathroom but his bedroom, as well.

And when he would try the “I did it the best I could, I’m just not as detailed as you” BS. I would tell him that was okay, each time he gave it a try I would come in and critique it and give him helpful tips so he could go back and do it again.  The right way.  Cycle repeated until it was done.

It was because of this little exposure to the “this is my bad trait so I am going to use it as an excuse” I had a firm rule in my house.  When each child turned 13 they had full responsibility for their own laundry, helped fix meals and were responsible for cleaning their own areas before being released on the world for the weekend.

I see and hear about these little jedi mind tricks a lot.

A friend of mine is a team lead in a mechanical environment and one of the guys on the line is excused from performing certain tasks because he just wasn’t very good at math.  That worked on the old manager, but not for my friend.

Or how about the girl at work that isn’t a “people person” so she gets excused from taking her shift at the front desk?

It seems others are allowed to behave badly because they admit that they have bad traits.

I am a pretty passionate person.  If I have an opinion about something and someone asks then I will tell them.  Sometimes my passion is a bit much but this is not an excuse to be rude or insensitive.  I am also very impatient, and I do not always wait well.

Being a blunt and direct person or impatient does not give me free license to be rude to others. It is not a get out of jail card free just because I admitted it.  “Oh I know I am completely being rude but I already prefaced it with I am impatient so it is acceptable.”  Yeah, I don’t think so.

A friend of mine posted the song “Hard to Love” the other day and said it described them perfectly.  In listening to the song I thought, not so much.  It is easy to like someone but not always easy to like them.  So you may be hard to like, but admitting that you are an ass is not granting you forgiveness for being an ass.  Stop being an ass.

If you find yourself in a situation where you are behaving badly but using a certain trait as an excuse – knock it off.  I have found myself there before, waiting endlessly on something and finding myself becoming a bit (or more) bitchy.  I have to remind myself that taking it out on anyone else is not going to solve the problem nor make me feel better.  Yes, that little voice in my head says, “suck it up cupcake”.  Either wait patiently or walk away.

Take responsibility for your own actions.

If you are a manager then you must hold people accountable for their actions.  My friend who works with the guy who “isn’t good at math” took him aside and told him that he would teach him how to figure out what he needed to know.

He took away his excuse.

As a manager you must take away the excuse, not only for the individual’s benefit, but for your team and company as well.  Other team members do not like the “forgiven because admitted bad trait” syndrome.  They work hard and do things they don’t like and don’t get a free pass.  Show respect for the rest of your team.

Giving them the opportunity to learn takes away that excuse.  It will probably come out that they just don’t want to do it.  My son finally got to that point “I just don’t want to clean my bathroom, it is going to get dirty anyway.”

My responses varied but were normally along the lines of “I don’t like hearing you complain yet here we are.  You can fight me all day and have a really, really bad night or you can suck it up, get it done and then get out of the house.  Your choice.”

What trait do you find that you use an excuse not to be your best?  Have you realized yet that you are only hurting yourself?  Either pushing people away or loosing out on opportunities?  Isn’t it time that you turn that excuse into an opportunity to take a new path and be able to enjoy the things you really want to rather than spend way too much time avoiding those you do not?