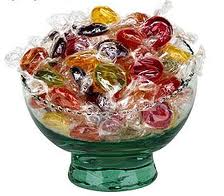 When I was about five or six one morning my mom took me to her work and introduced me to the girls in the office. One woman had a candy dish on her desk and asked if I would like a piece of candy, to which I replied, “No – thank you; I would like two please.”

At that time my mother did not correct me or tell me that I was being rude for asking for more than what I was offered, she was too busy blushing from the laughter of the ladies in saying how very polite and forward I was. At the time I did not see how this was a societal error because in my young mind I answered the question honestly and I said please.

My grandmother worked for a company eons ago that at one point moved to another location. She told her boss that she would be changing her working hours because she did not want to deal with the rush hour traffic. Any clue where I get my personality? Anyway, I remember hearing my mom talk about how she couldn’t believe my grandmother was so forward in making this statement. Again, being young, I did not understand why it was a bad thing – it made sense to me.

So often we grow up with very well intended people in our life that continually tell us to be grateful for what we have, don’t ask for more than we deserve, and how millions of kids are starving in a third world country. These messages are meant in a positive way I believe; however they really do us some major harm as adults.

I never used the starving kid’s line to get my son to eat anything – honestly he didn’t care about anyone but himself as a child so some obscure guilt trip was not going to work. Instead I got creative, like when he didn’t want to try brussels sprouts – he was very little and just learned he could control and create certain body noises/functions. So I told him that they made him fart and he ate them all up.

I do believe we should be thankful for what we have – absolutely. I am blessed with so much in my life and everyday I give a tremendous amount of gratitude for the here and now, and for that which I am striving for. If only our parents had modified those statements just a bit just imagine the difference. “Be thankful for what you have and what you are going to achieve next.” It would have formed the opinion to accept that we want more and to develop the courage to go for it.

So often I talk to clients who, after coaching, it is uncovered that they really want more than where they are; but they were embarrassed to admit it. The first reason why they have such hesitancy is they think it is beyond their reach. Once we break it down to show that they have the skills, abilities and tools to accomplish that goal the real reason comes out – they don’t think they deserve it. In one way or another there is an overwhelming sense of not deserving better for ourselves.

Whether it be because we feel if we want more than we are not being appreciative of what we have, which is in no way a direct correlation; or that we have always been discouraged from giving ourselves the freedom to think big. But if it is going to make you happy and it does not cause harm to anyone else then how on earth can it be a bad thing?

It isn’t, we just psych ourselves out.

This happens across the board in personal and business arenas. “I’m just a (insert title here) I don’t have the experience/education/skills… to be a (insert dream title here).” Well, you have to start somewhere. If you don’t have the education, go get it. Maybe you do have the skills you just haven’t looked at it from the dream job perspective to see that you have been using them all along.

“Oh, I could never (talk to/ask out/be with) that guy, he’s way out of my league.” According to whom? My family is such a mixed bag of personalities and professions that I was blessed to know them as family, not as titles. Whether it be the top level executives of a powerful company to the front line employee – I love each member of my family unconditionally and thus learned to get to know people for who they are, not what they do.

Years ago I went to Keeneland for the races and was given the box passes – you know, passes for the so-called hoity-toity section. I struck up a conversation with an elderly gentleman with whom I had the pleasure of spending the entire day. We discussed the races, the weather and did a lot of people watching. At the end of the afternoon when he gave me his card and told me that the next time I was in town to let him know and he would secure our places in the boxes. When he handed me his card it was only then that I learned of his title – the president of a very prestigious bank.

Over the next few years I made several trips to the area and the races and we spent many lovely afternoons watching the races and talking. Turns out that the bank presidency was a slowing down position for him, he had served on the SEC, been an advisor to some of the foremost experts in the financial industry – he was a living legend; but to me, he was my friend Gene.

The first time I introduced my son to Gene I did not tell him about his great successes, I wanted him to know him as Gene. After getting to know him, I did tell my son of Gene’s background and he was quite impressed, but fortunately, he just saw him as that neat old guy that got us in the place with the good food.

Allow yourself the opportunity to want more for yourself – to allow yourself to accomplish your goals, be happy and have that which you want in your life. Whether it be a better job, the person who makes you smile without effort or a material item. If these are the things in life that make your life better than don’t just take the one offered, go for at least two please.